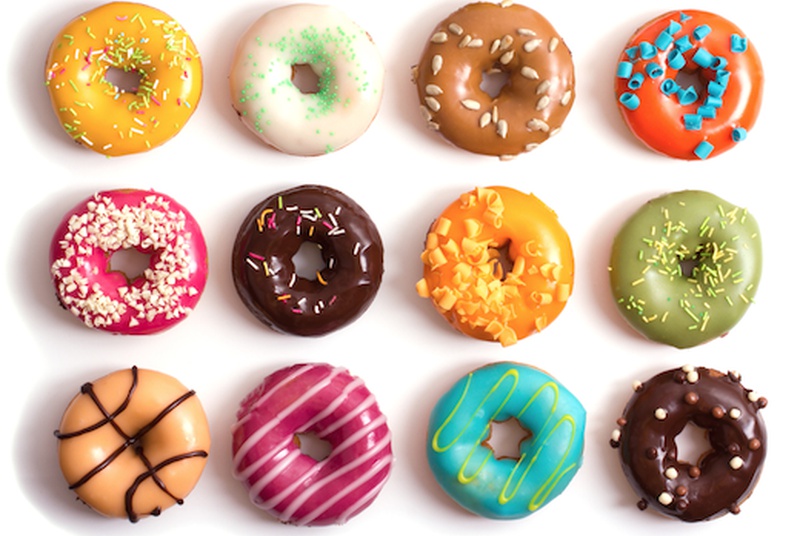 5 Unhealthy Foods Engineered to Be Addictive

By Martha Rosenberg
Americans’ love affair with snacks is growing– along with their waistlines: the ubiquity of junk food, the ubiquity of junk food advertising, and stealth food technology. People who polish off a whole bag of chips or cookies at one sitting (usually in front of TV) are often doing exactly what the product was designed to do–be addictive.

Have you noticed the overpowering something-in-the-oven smell that wafts up when you walk past a Subway? Mark Christiano, Subway’s Global Baking Technologist, insists the aroma is not pumped outside to entice passers-by and adds that the bread recipe is “proprietary.” But in the war for your food dollar, all tactics are clearly on the table including the way a food smells, looks, and feels in the mouth. Nothing is left up to chance.

“Food technologists” use $40,000 devices that simulate a chewing mouth to test and perfect chips, for example. “People like a chip that snaps with about four pounds of pressure per square inch,” says Michael Moss, author of Salt Sugar Fat: How the Food Giants Hooked Us so technologists seek “the perfect break point.”

Fat is a big part of the food technology stagecraft too because it promotes crunch, creaminess and contrast, blends flavors and even lubricates mouthfuls so that people eat faster. And, speaking of fast eating, people who wolf down their food do not entirely have themselves to blame–the actual time it takes to chew food has shrunk. “In the [45 years] that I have been in the food business, we used to have foods that we chewed 15 times and 20 times and 30 times before we swallowed,” says Gail Vance Civille, of the consumer research firm Sensory Spectrum. Now most foods only have to be chewed 12 times and “you’re in for the next hit to get more pleasure, says Civille.

"starch is actually absorbed more quickly than sugar, which causes glucose levels in the blood to spike and the body to yell “more!”

Of course sugar, salt and fat themselves can be addictive as Häagen-Dazs or Krispy Kreme junkies can attest, but food technologists have a clear equation for designing hyper-rewarding, hyper-palatable foods. They fabricate “complex formulas that pique the taste buds enough to be alluring but don’t have a distinct, overriding single flavor that tells the brain to stop eating,” says Moss. 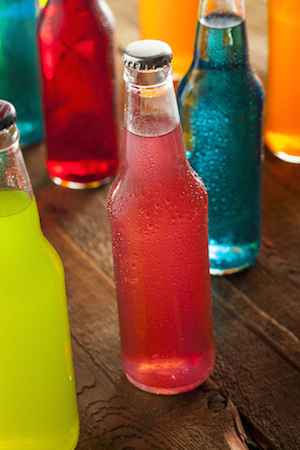 Half of Americans drink a soft drink every day and many people say they are addicted. This is not an accident. To create Cherry Vanilla Dr Pepper, for example, food technologists tested 3,904 “tastings” or versions for “dryness,” “gumminess,” and “moisture release,” the right mix of cherry, vanilla and Dr Pepper flavoring and of course color.
Of course caffeine is one reason people get hooked on soft drinks. Constant exposure to caffeine makes your brain compensate by decreasing the number of receptors for its own “stimulant,” norepinephrine, which makes you seek the stimulation from an outside source. But there are other probable “addictors” as seen in Mountain Dew, arguably the most addictive of the soft drinks (including among some gamers who reportedly drink it nonstop). While Dew certainly packs a lot of caffeine, it derives its fizzy bite from phosphoric, citric, malic and tartaric acids, all kept afloat by a controversial additive known as BVO or brominated vegetable oil. Beverage companies are starting to drop BVO, which the public has turned against because it is also a flame retardant. But Dew will likely keep its bite. 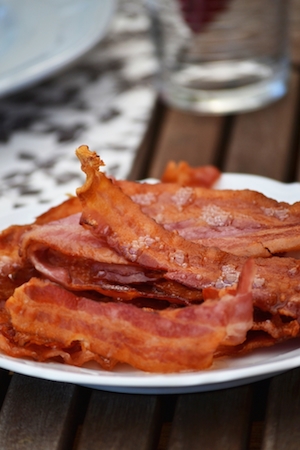 Even people who would give wide berth to a Slim Jim or Kentucky cured ham have been swept up in the Bacon Everywhere movement with bacon added to everything from gum and candy to ice cream. Unfortunately the bacon flavor everyone loves is created by ingredients no one loves–nitrites. Sodium nitrite, also found in ham, pastrami, salami hot dogs and sausages, inhibits bacteria, lengthens shelf life and imparts the pleasing taste and color that add to these foods’ appeal. But, and it is a big but, during the process of cooking, nitrites combine with other chemicals to form carcinogens which many health organizations warn against.

Can’t bacon be made without nitrites? Yes and no. “America’s Test Kitchen had the results of their bacon testing and they disliked the nitrite free sample because it was too pale and didn’t taste like bacon,” says one post on the web site chowhound. “Nitrates add plenty to flavor. You’ll find bacon producers who attest to that all over Google,” says another post. The New York Times food writer R.W. Apple himself states that “nitrates provide some of the characteristic bacon flavor, and the only nitrite-free bacon I have sampled tasted more like roast pork,” defending the safety profile of the chemicals. The web site Livestrong agrees that nitrites “give cured meats that characteristic smoky flavor and pink color that make them irresistible,” but suggests that people limit their intake and “have a salad” instead. 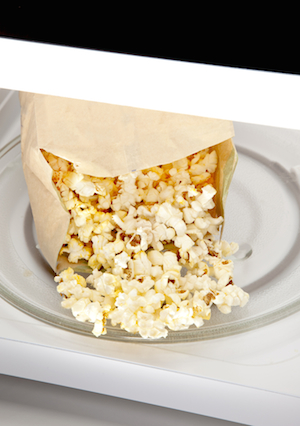 Have you ever tried to surreptitiously make yourself a microwave popcorn at work and found it is impossible to disguise? Microwave popcorn sends off an immediate olfactory alarm to everyone on your floor and probably the floors above and below you. Not only do they know you are not working but snacking they want some microwave popcorn too.

The irresistible smell is from the butter flavoring chemicals like diacetyl and Pentanedione which are dissipated into the air by the heating process. And, not surprisingly, there are questions about their safety. While lawsuits have been brought and won by workers in microwave popcorn manufacturing plants who developed “popcorn lung” from working around diacetyl, consumers are also apparently at risk. Two years ago, Wayne Watson was awarded $7 million when he sued the manufacturer and retailers of microwave buttered popcorn that caused him to develop “popcorn lung” after eating two bags daily for 10 years. The potentially fatal respiratory disease is usually a condition called constrictive bronchiolitis obliterans in which the smallest airways of the lung become scarred and constricted, blocking off movement of air.

Since diacetyl concerns have been raised, many manufacturers have dropped the ingredient. Some still use the potentially harmful slippery nonstick surface coating PFOA on the popcorn bags, however–another reason to “resist” microwave popcorn and make your own. Especially if you are eating it twice a day like Watson. 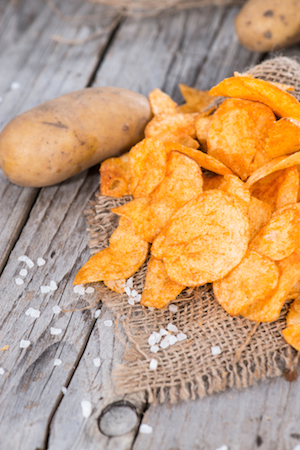 Like sugar, people can become addicted to salt and the only way to “kick,” say experts, is to go cold turkey and let your taste buds return to normal. But there is another reason that salty snacks like potato chips, French fries, toasted crisp breads and even non-salty roasted breakfast cereals can be irresistible. These foods have undergone the “Maillard reaction,” explains New York University food expert Marion Nestle which “causes baked, fried, and toasted foods to turn attractively brown and taste yummy.” Cooking carbohydrate-rich foods at temperatures high enough to produce a yellow or brown surface usually means that acrylamide has formed. And, you guessed it, acrylamide is a cancer-causing and potentially dangerous chemical. Once again, the chemicals that make food irresistible are the ones we should resist. The state of California actually sued potato chip makers for failing to warn California consumers about the health risks of acrylamide in 2005.

There is something else that makes us crave salty snacks, They are designed to have “vanishing caloric density” or the ability to melt in the mouth, writes Michael Moss. “If something melts down quickly, your brain thinks that there’s no calories in it . . . you can just keep eating it forever,” food scientist Steven Witherly tells him during an interview for his book.

Potato chips have another hook, say food experts. Their coating of salt, fat and sugar found in the starch of the potato itself reward the brain in a triple punch. The starch is actually absorbed more quickly than sugar, which causes glucose levels in the blood to spike and the body to yell “more!” A New England Journal of Medicine study of 120,877 women and men found the most weight-inducing food they ate was potato chips. 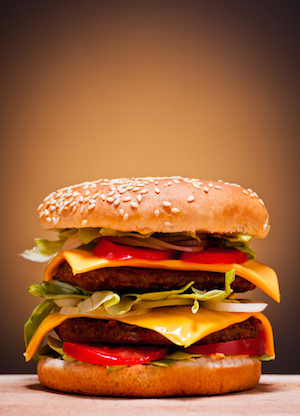 Fast food, of course, is predicated on cravings and addictions. Why else would it last–including drive-through windows? Why else would its overriding features be salt, fat and sugar? Eighty-three percent of people who eat outside of their home do so because of “cravings” a recent study revealed and 75 percent who visit restaurants more than once a week do so for a specific dish they crave.

While McDonald’s has never been toppled from the number one burger position that Wendy’s, Burger King, Carl’s Jr, Jack in the Box and Hardee’s crave, its Chicken McNuggets opened it up to fast food chicken lovers and were also an instant success. Unfortunately, McNuggets are probably the McDonald’s item with the most problematical chemicals. They are made with dimethylpolysiloxane, an anti-foaming agent used in, believe it or not yoga mats, propylene glycol, an antifreeze ingredient and autolyzed yeast extract which “artificially enhance[s] the taste and craveability of food,” says Healthy Living.

Clearly, sweet, salty and fatty foods can be hard to resist, especially when they are ubiquitous, cheap, marketed around the clock and fast. But just to be on the safe side, Big Food has also added addictive chemicals to amp up the “irresistibility.”

Have You Ever Noticed That You Can't Stop Eating These Foods?