How To Spot Sugar On Food Labels

By Mark Briggs (The Ecologist)

If you're trying to limit the amount of sugar you eat, then you need to learn the other names for sugar on food labels. Sugar comes in so many forms and goes by so many names that looking for sugar on a label can feel like finding a needle in a haystack! Fortunately, with a little bit of knowledge you'll quickly become an expert at recognizing sugar on food labels and avoid having your health and weight loss efforts sabotaged.


Why Worry About Sugar?

Sugar is often a hidden ingredient in processed foods. Among other things, it enhances flavor, promotes browning and aids in preservation; however, the high sugar content in foods comes with a trade off. Excessive sugar intake can lead to type 2 diabetes, contribute to metabolic syndrome and lead to excessive weight gain. The empty calories in sugar don't provide any nutritional benefit to the body, which is why it is important to know other names for sugar on food labels.
As noted by the Center for Science in the Public Interest (CSPI), people who consume diets high in added sugars consume lower levels of fiber, vitamins and minerals, and other nutrients, and by displacing these protective nutrients, added sugars may increase the risk of osteoporosis, certain cancers, high blood pressure and other health problems. 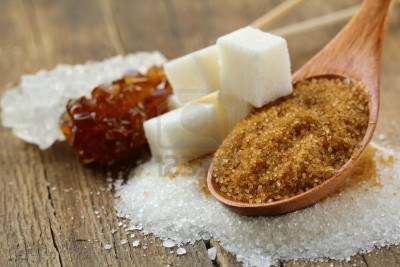 Although the FDA (and the USDA) has certainly acknowledged and tried to define the term "added sugars," or those sugars that aren't naturally occurring in foods (for example, fruits), the government is leaving it up to us to be food detectives and learn all the various names for sugar and, more importantly, how much of it we're actually putting in our mouths.

Sugar masquerades under a variety of guises and trying to figure out what percentage of calories these sugars represent in a packaged food product is close to impossible.


That's because the FDA has refused to add an "Added Sugars" line (in grams) within the "Sugars" section on the nutrition facts label. Instead, added sugars are only mentioned in the ingredient list -- and only indecreasing weight order, not by percentage of calories.
Realizing this loophole, some food companies seem to be taking some extreme liberties. Not only are they using some of those tricky sugar synonyms in the ingredient list, but they're also using several of them, in a single product. Added sugars are added sugars. No matter what you call them, they do pretty much the same thing to food (make it taste sweeter). So by dividing the total amount of added sugars into three or four different sugar names instead of using just one type of sugar, companies are able drop their added sugars further down the list (the less the weight, the lower the rank on the ingredient list).
So for example, if a manufacturer wants to sweeten up a certain brand of crackers, it can either do this using 15 grams of "sugar" or, 5 grams of "malt syrup," 5 grams of "invert sugar" and 5 grams of "glucose". Some manufacturers seem to be choosing this divide and masquerade method, placing these ingredients lower down on their products' lists, making us believe that the amount of sugar in the product is smaller than it is. Bingo!

Four examples of foods that have divided their total added sugar content between several confusing synonyms (note where these names are positioned on the ingredient list).

Other Names for Sugar on Food Labels

There are many different names for sugar. Two really good ways to disguise sugar on food labels is to use a long, scientific sounding word or to rename the sugar altogether.


One of the easiest ways to recognize sugar on a food label is by recognizing the -ose suffix. When you find words that end in -ose, there's a good chance it is sugar.

Just because it doesn't end in -ose, however, doesn't mean it isn't sugar. There are plenty of other names as well that may or may not sound like sugar.

Regardless of how they sound, the following are all sugar:

A herb native to South American, stevia is 300 times sweeter than sugar. It has been used as a sweetener for centuries in South America, and in Japan, makes up 41 per cent of the sweetener market. So widespread is its use, before Coca Cola decided to ‘standardise’ the recipe, stevia was used in Japanese Diet Coke.
The herb recently ran into trouble in the US with the Food and Drug Administration over the label ‘sweetener’ but has rebounded to become the second most popular sugar alternative in the US under the term ‘dietary supplement’. Stevia has no calories and no glycemic impact making it suitable for diabetics as well as weight watchers and eco warriors. It can be grown at home, although turning it from herb into a granular product isn’t an easy DIY project.

Sap from the coconut palm is heated to evaporate its water content and reduce it to usable granules. Coconut sugar is nutritious and has a low score on the glycemic index, which means you don’t get a buzz followed by a crash. It tastes similar to brown sugar but is slightly richer. You can substitute coconut sugar for traditional sugar pretty much wherever you use the latter. Once tapped for sap, the trees can go on producing for 20 years and produce more sugar per hectare than sugar cane and benefit the local soil.

Raw honey is used by many cultures as a remedy for many health ailments including ulcers, digestion problems, and even seasonal allergies. Studies have shown raw honey to have antibiotic, antibacterial, and antimicrobial properties. Many people use honey topically on cuts and scrapes to help fight infection.
With antioxidants, minerals, vitamins, amino acids, enzymes, carbohydrates, and phytonutrients, raw, unprocessed honey is considered a superfood by many alternative health care practitioners and a remedy for many health ailments. Choose your honey wisely. There is nothing beneficial about processed honey

Because of the way traditional tabletop sugar is produced (heating the top layer which forms the crystals you have in your bowl), many of the nutritional benefits are left in the molasses.
Blackstrap molasses is perhaps the most beneficial and is a good source of iron and calcium. It’s quite thick and viscous and is best used in baking. It is also sweeter than sugar and so you’ll need less.

Artichoke syrup is rich in inulin, a type of fiber that feeds the friendly flora of the intestinal tract. It has an exceptional sweet taste and a very low glycemic index, making it a great sweetener for people with candida-conscious diets and diabetic blood sugar awareness. Research indicates that the inulin found in artichoke syrup may improve gastrointestinal health and calcium absorption.

Lucuma has a uniquely sweet, fragrant and subtly maple-like taste that will bring your desserts to life without making your blood sugar levels skyrocket. Lucuma is an excellent source of carbohydrates, fiber, vitamins, and minerals. It boasts of plentiful concentrations of beta-carotene, which makes lucuma a powerful immune system booster, and it is rich in iron, B2 and B1.
Its low sugar content makes it a healthy alternative to sugar for people who have diabetes and it is a great sweetener for women who are breastfeeding.

As with all sweeteners, use in moderation. Any sweetening agent that gets overused can overwhelm the liver and get turned in bad fat. Syrups like maple syrup and agave syrup have some plus sides, but they are both wrought with controversy in the health community and there are better options available.
By no means do natural sweeteners give us license to spoil a sweet tooth rotten, but they’re an improvement over sugar. So use the profiles above as guide to get you off of the nasty, toxic sugars, not as a licence to binge on somethings else.