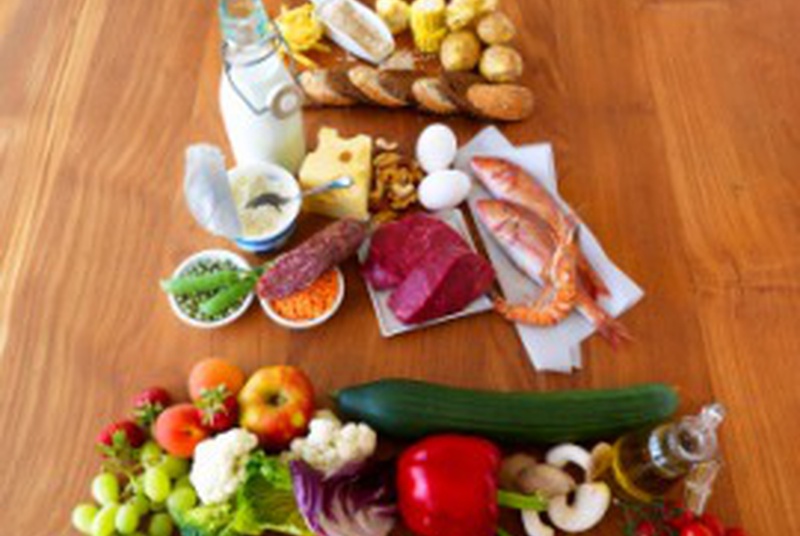 A full two-thirds of Americans are overweight or obese and childhood obesity has tripled over the past 30 years.

While the American agricultural system may be the envy of many less affluent nations, it also has many unintended consequences. One of them is a food system that promotes cheap food largely devoid of nutrients and chockfull of unhealthy ingredients that has caused obesity rates to skyrocket.

If you’re like most people, you probably do not know that there is NO link between agricultural subsidies and nutrition. This is a major part of the problem.

Directly related to this issue is the fact that the government’s nutritional guidelines are in large part mirrored by these same agricultural subsidies, rather than being built upon sound nutritional science.

The original food pyramid created and promoted by the US Department of Agriculture (USDA), told you that the “base” of your diet should consist of grains, pasta and breads, despite the evidence showing that grains, which break down into sugar in your body, promotes fat accumulation and drives insulin resistance and related diseases, including diabetes, heart disease and cancer.

In short, the reason you’re told to make grains the cornerstone of your diet is because that’s what farmers are paid to grow in the US. There’s a lot of it, and it’s inexpensive compared to healthier foods like vegetables, for which few subsidies are offered. 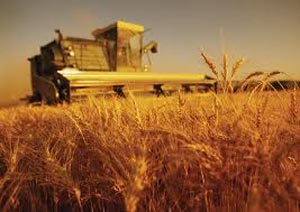 There’s no denying the fact that modern agricultural practices promote the consumption of an unhealthy diet. Today’s sky-high rates of obesity, diabetes, and cardiovascular disease can be tied directly to changes in how our food has been grown and produced over the past 40 years.

According to the Environmental Working Group (EWG), between 1995 and 2010, a mere 10 percent of American farmers collected 74 percent of all subsidies, amounting to nearly $166 billion over 16 years.

These farm subsidies bring you high-fructose corn syrup, fast food, animal factories, monoculture, and a host of other contributors to our unhealthful contemporary diet.

A report comparing federal subsidies of fresh produce and junk food, prepared by US PIRG, a non-profit organization that takes on special interests on behalf of the public, revealed where your tax dollars are really going and it's quite shocking: If you were to receive an annual federal subsidy directly, you would receive $7.36 to spend on junk food and just 11 cents to buy apples.

Equally astounding is the following statistic gleaned from a recent interview with Michael Pollan, in which he points out that according to USDA data, 92 cents of each food dollar now goes to someone other than the farmer—it’s actually spent on the various manufacturing and packaging processes associated with processed foods.

“We’re not going to undo that unless we buy more directly from farmers and buy unprocessed food,” he says.

And I think that’s a crucial point, really. Imagine if food growers could get most or all of each food dollar instead of it being spent on plastic wrappers and food processing! Then they might actually be able to afford growing something other than corn, soy and wheat, which are three of the unhealthiest staples of the processed food industry...

Following USDA Diet Recommendations Is a Recipe for Obesity 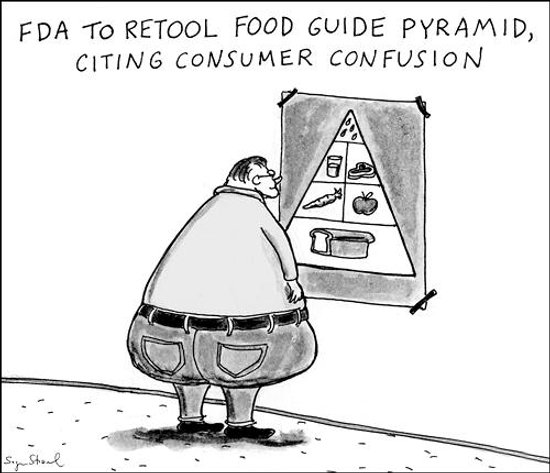 Some of you may be old enough to recall the 1992 Food Pyramid, which had grains as the largest bottom block of the pyramid, encouraging you to eat 6-11 servings of bread, cereal, rice and pasta each day.
This excess of carbohydrates, most of them refined, is precisely the opposite of what most people need to stay healthy. At the very top of the pyramid was fats and sugar, and while sugar clearly belongs there, healthy fats do not. In fact, most people would benefit from getting anywhere from 50 to 70 percent of their total calories from healthy fats!

The food pyramid was replaced with “MyPlate” in 2011, which slightly downplayed grains as the most important dietary ingredient, making vegetables the largest “slice,” but it still has a long way to go before it will offer a meal plan that will truly support your optimal health.

One of its most glaring faults is that MyPlate virtually removed all fats from the equation! In fact, except for a small portion of dairy, which is advised to be fat-free or low-fat, fats are missing entirely... There is no mention of the importance of dietary fats, even the "politically correct" ones like the monounsaturated fats in olive oil and nuts, such as pecans (canola oil is also in this category, but I advise avoiding it and using coconut oil instead).

Of course, one of the most important of the healthy fats is animal-based omega-3, which is also absent from the plate. Deficiency in this essential fat can cause or contribute to very serious health problems, both mental and physical, and may be a significant underlying factor of up to 96,000 premature deaths each year.

Not surprisingly, the US government still has not acknowledged the ever mounting data showing that saturated fat is actually an incredibly healthy, nourishing, and all-natural fat that humans have been thriving on for generations. It provides the necessary building blocks for your cell membranes and a variety of hormones and hormone-like substances that are critical to your health. Saturated fats from animal and vegetable sources, such as coconut oil, avocado, non-CAFO meat and dairy, also provide a concentrated source of energy in your diet.
When you eat fats as part of your meal, they also slow down absorption so that you can feel satisfied longer, which helps curb overeating. In addition, they act as carriers for important fat-soluble vitamins A, D, E and K, and are needed for mineral absorption and a host of other biological processes. To get these healthy saturated fats in your diet, you need to eat animal foods like butter and other full-fat raw dairy products and eggs, yet these foods are still demonized by the establishment.

What a Food Pyramid Based on Nutritional Science Really Looks Like 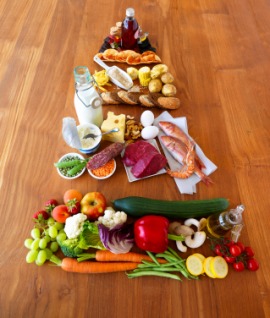 In an effort to remedy the situation, I’ve created my own food pyramid for optimal health. My pyramid, which is based on nutritional science opposed to agricultural subsidies and industry lobbying efforts, is almost the inverse of the original USDA food pyramid, featuring healthful fats and vegetables on the bottom.
Again, most people would benefit from getting at least 50 percent of your daily calories from healthful fats, such as avocados, coconut oil, nuts, and raw butter. In terms of bulk or quantity, vegetables should be the most prominent feature on your plate. Veggies provide countless critical nutrients, while being sparse on calories.

Next comes high quality proteins, followed by a moderate amount of fruits, and lastly, at the very top, you’ll find grains and sugars. This last top tier of sugars and grains can be eliminated entirely, and your health just might become the envy of everyone around you... While this may sound impossible to some, I can attest to the fact that quitting carbs is doable. In fact, once you’ve successfully switched over from burning carbs to burning fat as your body’s primary fuel, carb cravings actually disappear, as if by magic. There are two primary ways to achieve this metabolic switch, and these strategies support each other when combined:

Other Atrocious Health Recommendations That Drive Obesity and Disease Rates

Make no mistake about it, obesity is the result of inappropriate lifestyle choices, and unfortunately, our government has spent decades disseminating astoundingly inaccurate information about diet and health. In many ways, the US government has become little more than a propagator of corporate-sponsored propaganda. The following is just a tiny sampling of the pervasive misleading information on weight and obesity disseminated by our government agencies:

Yes, You Can Slim Down Without Even Trying...

Once you realize the root of the problem, which begins with agricultural subsidies that are based on economics and have nothing to do with growing nutrient dense foods for the masses; which in turn has spawned dietary recommendations that are also based on industry profitability opposed to nutritional science, then it becomes easier to understand why a full two-thirds of Americans are overweight or obese. Even the education of registered dietitians is sponsored and taught by the junk food industry!

You CAN break free.

Perhaps one of the most powerful scientific discoveries to emerge in the past several years is that the old adage “a calorie is a calorie” is patently false. The research clearly demonstrates that even if you control the number of calories you eat, if those calories come primarily from fructose and grains, you are at increased risk of obesity and pre-diabetes, which includes both insulin and leptin resistance, fatty liver, high blood pressure and high triglycerides. Insulin and leptin resistance in turn form the foundation for virtually every chronic disease you can think of, including heart disease and cancer.

The answer, therefore, is to turn the conventional food pyramid on its proverbial head, and dramatically reduce or eliminate virtually all grains and sugars, especially fructose. This in and of itself will go a long way toward preventing accumulation of excess fat. However, to be truly effective, you want to make sure you’re replacing those refined carbs with vegetables and healthful fats.

Now you’re entering into a diet that will allow your body to shift from burning carbs to burning fat (or ketones) as its primary fuel. At this point, weight loss is not the only benefit you’ll reap. Compelling research shows that this type of diet, also referred to as a ketogenic diet, is an effective prevention and even treatment strategy for cancer.

Intermittent fasting is another powerful key that will help you transition your body from obtaining the majority of its fuel from glucose stored as glycogen in your muscles and liver, to the fat stored in your tissues. This is one of the most effective ways I know of to burn off excess body fat and eliminate sugar cravings. These are all things that are well within your power to do. Next, I urge you to become involved with changing the system that has brought us to this unfortunate point in our evolution.Growing sprouts in your home is a powerful way to eat very healthy and inexpensively.

Changing your shopping patterns by supporting local agriculture will not only help improve your health, it will also help improve the environment and bring back our rural communities. One way to get involved is to simply buy more food from your local farmers. It is important to understand the impact you have when you spend your money on processed factory food.